An article in the Clapham Society Newsletter 375 March 2015

In 2014 the Society was approached by the owner of a house in Culmstock Road about two painted friezes above picture rail level in the entrance hall. They had suffered water damage following a recent fire and she was seeking a restorer and also wondered whether the Society would be interested in inspecting them. Fortunately, the Society was able to provide the name of a restorer in Oliver Kay (blueskydecorating.co.uk) the son of Ann, a longstanding Clapham Society member. Oliver carried out the work and pictures of the restored friezes are shown below.

The friezes are of scenes of sailing boats on a Swiss lake, probably Geneva from the pattern of the sails, with mountains in the background and are in the style of the Swiss artist François-Louis David Bocion. He was an artist and teacher born in Lausanne in 1828 who, after working in Paris, was for more than 40 years a professor at Lausanne Ecole Industrielle.

The house in Culmstock Road is one of a row of 22 built in 1900-01 by W H George, a builder/developer who was very active in the area. They are on the site of Beechwood, a Georgian house which was demolished in 1898. Bocion died in 1890 so the friezes could not have been painted by him. Who then was the artist of these unusual features? The most likely contender is the original occupier of the house, Thomas Ansell, described in the census of 1911 as an art master employed by London County Council. He and his wife Emily, a London County Council class teacher, lived in the house from 1901 until 1953, so he would certainly have had plenty of time to work on them!

Ansell was 44 in 1911 and does not appear anywhere in earlier censuses so it is possible that he may have been travelling on the Continent and had studied under or been inspired by the work of François Bocion. Oliver Kay was given the opportunity to add a small personal element to the restored frieze and chose to add a light in one of the windows of the castle. It brings a small extra touch to an unusual and attractive feature. 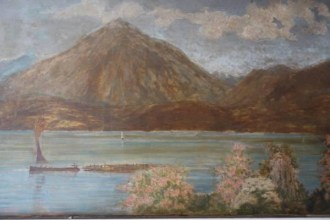 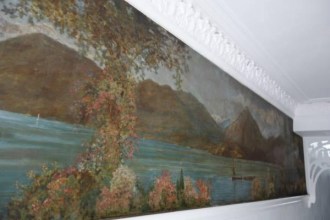 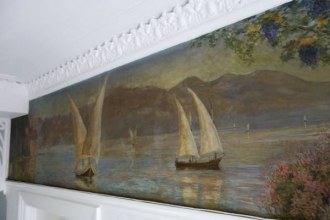 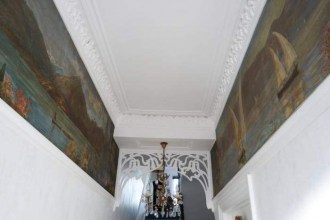