For its millennium edition Wisden, the cricketer’s almanack and bible, asked 100 of the cricketing great and good (ex, and some current, players, commentators and journalists) from around the world to nominate their five cricketers of the 20th century.
There were two Australians Sir Donald Bradman, who died in 2001, Shane Warne, who was still tormenting English batsman, two West Indians  the magnificent all rounder Sir Garfield Sobers and the supremely destructive batsman Sir Vivian Richards and a solitary Englishman Sir Jack Hobbs. How is it that a player who retired from cricket before most of the electorate was born received so many votes?

John Berry Hobbs (John was his father’s Christian name, Berry was his mother’s maiden name) was born in Cambridge on 16 December 1882. On his birth certificate his father is described as a slater’s labourer. Jack was the eldest of 12 children, six boys and six girls, and the family was extremely poor. He first played organised cricket at the age of 12 for the Church Choir Eleven and showed great promise. By this time his father had become a net bowler and professional umpire at Jesus College and Jack helped him with odd jobs during the school holidays. He could also practice his batting and watch the leading players of the day practicing on Parker’s Piece. One of them was Tom Hayward, also Cambridge born and now a leading professional batsman with Surrey. Jack had tremendous natural talent and was entirely self taught. He left school at 13 to be a college servant at Jesus for which he was paid 7/6d (37.5p) per week. The work was humdrum but in his spare time it enabled him to develop his batting skills and he was invited to play, as an amateur, for Cambridgeshire v. Hertfordshire when he made 30. He made 26 not out for the local side against a team brought down by Tom Hayward when called in as a last minute substitute  an innings which gave great pleasure to his father who was umpiring.

At 19 he left Cambridge to be assistant professional at Bedford Grammar School. Heavy work on the ground and constant net bowling were very exhausting but one compensation was when umpiring the school’s annual match with St Paul’s he had his first sight of London. At the end of the term he went home to Cambridge and earned his first match fee of 10/- (50p.) when he scored 119 for Royston against Hertfordshire Club and Ground. His father was delighted with this performance but sadly died a week later. Tom Hayward brought down a side to play a match for the widow’s benefit. Jack, in mourning, did not even consider playing or approaching Tom Hayward who he held in great awe. However, others spoke to Hayward on his behalf and eventually he was summoned for a trial at the Oval together with a dozen other young men. After two days of trials he was offered a contract to qualify for Surrey at a salary of 30/- (£1.50) a week during the season and £1 a week in the winter. He did not know that Tom Hayward had persuaded the Surrey club to pay him a £10 bonus at the end of the season to ease his family’s situation.

In this age of instant qualification it is hard to believe that players born outside a county had to spend two years living in that county and playing in minor matches before they could be selected for the first eleven. Not only that but they could not go home during the winter and official visits were paid every few weeks to ensure that players were at their official lodgings. Jack was in digs in Fentiman Road off Clapham Road very close to the Oval.

Having qualified Jack made his first class debut in April, 1905 against a Gentlemen of England eleven captained by W G Grace and made 88 in the second innings. In his second match he made 155 and was given his county cap. At about that time he visited Clapham Common to watch a friend play. As some of the team had not turned up he was invited to join in and scored a century knocking some of the balls into the pond. Further success followed in 1905 including 94 against a powerful Australian team but this could not continue and he lost form and had to be rested. He had no reserves of strength or stamina and six days a week of cricket had proved too much for him. However, he was determined to prove himself and spent the winter building up his fitness.

In 1906 he established himself as a complete cricketer in talent, temperament and character. This time there was no falling off. He established himself in the Surrey eleven and at the end of the season married Ada Ellen Gates of Cambridge, who he had known for some years, and they went to live in a rented flat in Denmark Hill. Jack was too modest to invite Tom Hayward to the wedding although he had been opening the batting with him for two seasons. In 1907 they had four century opening stands in a week. Hobbs was fortunate in his batting partners or perhaps one should say they were fortunate in him. His second great partnership, for England, was with the Yorkshireman Wilfred Rhodes. In the Melbourne Test of 1911-12 they scored 323 for the first wicket  still the highest opening partnership for England v. Australia. When Hayward retired Andrew Sandham became Hobbs’ partner for Surrey. Between 1919 and 1934 they 66 times scored more than 100 for the first wicket. The final partnership, generally held to be the finest in Test cricket, was with Herbert Sutcliffe of Yorkshire. They 11 times put on 100 runs for the first wicket in Tests.

Although he achieved great success life for Hobbs was not always rosy. His benefit match in 1914 had to be transferred to Lords as the Oval had been requisitioned by the Army and was a disaster and there was no first class cricket during the war years when he would probably have been at his best. He worked in a munitions factory until he joined up in 1916. 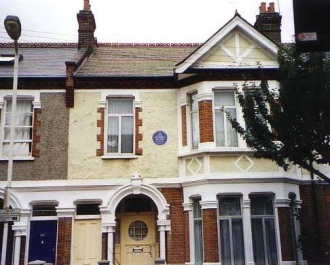 In 1913 he purchased 17 Englewood Road and lived there until 1926. A Blue Plaque on the house commemorates the fact. (Fig. 1) This followed his most successful season of 1925 when he scored 16 centuries (beating Tom Hayward’s record) and overtook WG Grace’s career record of 126. Perhaps it was this success that enabled him to move in 1928 to 39 Atkins Road which had been the first house built on the Clapham Park Estate and had originally been occupied by the Clerk of Works. (Fig. 2). It was pulled down in the early 1950s. 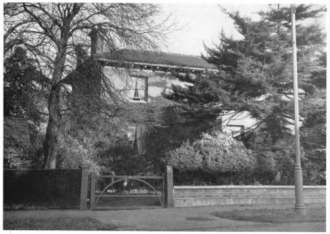 The Surrey club kept the gate money for the disastrous benefit in 1914 and granted Jack a new one in 1919. It raised the sum of £1,671 2s 7d and with this he opened a sports goods shop at 59 Fleet Street which lasted for 50 years. He served regularly in the shop and always maintained that he earned more from it than from playing.

Jack Hobbs retired from cricket in 1934 but his career record still stands supreme and is unlikely to be surpassed. He scored 61,237 runs in first class cricket with 197 centuries  both world records. Amazingly the last 98 centuries came after his 40th birthday. He scored a century home and away against every county. His highest score was 316 not out and his highest opening partnership, with Sandham, was 428. He played in 61 Tests and, significantly, his average in Tests was six runs per innings higher than his average in all matches. He had a capacity for producing his best in the face of the sternest opposition and when conditions were at their most difficult. Unlike Bradman he was not interested in scoring runs for their own sake and would often content himself with 60 or 70. For over 20 years he was the finest batsman in the world.

Jack Hobbs was a shy and modest man who avoided the limelight where possible and refused all invitations to speak in public. He did, however, have a lively sense of humour and was popular with team mates. A man of strong religious beliefs he was for 20 years a total abstainer although later in life he developed a taste for modest amounts of champagne. One day in 1953, whilst lunching with John Arlott, the quantity was slightly less modest and the Master’s Club was founded. Its only rules were that Sir Jack Hobbs was the perpetual guest of honour, there were no speeches and that the only toast was ‘The Master’. It still meets annually on his birthday and the menu is his favourite meal  tomato soup, roast lamb and apple pie. 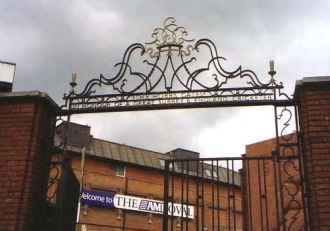 Jack Hobbs died in 1963. He was the first professional games player to be knighted. He was held in great respect and affection throughout the game and in his quiet way did much to enhance the status of the professional player. He is remembered by the Hobbs Gates, the main entrance to the Oval, with its simple inscription ‘in honour of a great Surrey and England cricketer’ (Fig. 3).

Acknowledgement: I would like to thank Bernard Battley for the loan of various books on Jack Hobbs which helped me in the preparation of this talk.

Editorial note: this talk was illustrated by photos taken from a number of publications on Hobbs and cricket. A selection of classic photos of Hobbs may be seen on the Cricinfo. website www.cricinfo.com . A direct link to the photos of Hobbs is here.