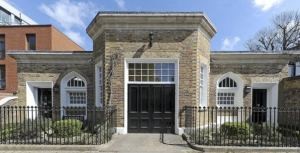 By the 1830s the original parochial school, which had been founded at least as early as 1648 and whose building still stands in Old Town, had outgrown its site. Eventually the Lord of the Manor agreed to sell a piece of land on Clapham Common North Side at a reduced price. It was bought by a benefactor, Mr Benjamin Brown, who had already agreed to present it to a group of trustees to build a new school for the boys. At a ceremonial opening on New Year’s Day 1839 the children were brought from Old Town by 11.30 am to receive a present of buns and then returned to the old school and dismissed for a half day’s holiday.

When built the school was in a short cul-de-sac ending in fields. There was just one large room lit by gas. In 1902 this was divided into various classrooms by movable partitions. The single-storey extension at the front was the Headmaster’s study. Under the original trust deed the school rooms might be used occasionally for public meetings ‘but not for any histrionic or immoral purpose nor for any purpose inconsistent with the principles of the Church’. This decision led to some disagreement a few years later when a scandalised secretary, the Rev. Francis Goode, resigned rather than agree to its use for musical entertainments and evening parties. However, such frivolities proved a valuable source of income for the school and were continued. From 1843 the Clapham Athenaeum held its meetings in the new premises. There were also special lectures given to raise funds, including a series of three by Dr. Gideon Mantell on geological research which raised £110. 14.8. The Rev. Charles Pritchard, Headmaster of Clapham Grammar School gave two lectures in the physiology of plants, but these only raised £13.10.0.

During the Second World War bomb damage led to the children being evacuated and the building became a staff canteen for workers at Ross Optical factory, which at that time occupied premises round the corner at what is now George West House.

By the 1960s it was clear that the Old Town site was too small and its location too hazardous, so it was closed and the girls and infants moved to a new school in Victoria Rise with the eventual intention of consolidating the whole school on that site. This happened in 1974 when the school in the building in Macaulay Road closed. For some years it was the offices of the Muscular Dystrophy Group, who renamed it Nattrass House after a benefactor, and in 1999 it became a private house which was attractively laid out by its owner – Frederique van der Vorm – who generously donated the plaque and unveiled it on the Society’s behalf on 23 May 2014 .

Please wait for the gallery to load (13 pictures), it may take several seconds.