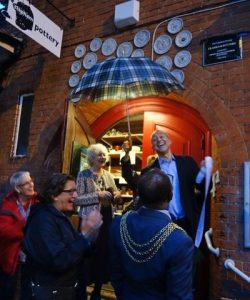 The story of the building in Rectory Grove known as Ingleton House, started in around 1903 when two houses that had been built c 1790 and numbered 2-4 Rectory Grove became St. Hugh’s Boys Home. It was owned by the Society of the Good Shepherd, an Anglican religious society, and was under the guardianship of the warden Arthur Russell Baker. In 1912 the chapel and refectory hall were added by the architect Lionel Grace. Both were panelled in oak, and the chapel had an organ gallery at the west end with four plaster cherubs on either side. Some original features can still be seen in the chapel.

The Home appears to have had links with the Royal Family early on and was visited by HRH the Duchess of Albany in 1905, and by her daughter HRH Princess Alexandra of Teck in 1907. With only two hours notice in 1913, it was announced that HM Queen Mary would be paying a surprise visit. Mr Baker managed to arrange for her to inspect a Guard of Honour, which was put on by the boys, who were kitted out in white gym dress. The visit was reported to have been a success and annually, thereafter, Queen Mary regularly sent gifts to the Ingleton House Sale of Work.

Among the influential patrons was Sir Francis Champneys, a distinguished obstetrician. In the Chapel, there is a plaque erected by him and his wife commemorating a son who had died young. It is dated 1922, and it is not clear why it was placed there in that year, since the chapel had been opened in 1912. Another early patron was Hon. WHD Smith, the son bookseller, WH Smith.

The 1911 census shows Arthur Russell Baker as a single man of 35. Ingleton House was described as a boys’ home, with 27 rooms. Also living in the house was one member of staff, and 60 teenage boys. 15 had jobs, generally as artisans or clerks, and the rest were described as at school. Most of the boys were born in various parts of London, some in places unknown, and only one in Clapham.

Russell Baker retired in 1935, after serving as warden for thirty years. He was a founder member of the Clapham Antiquarian Society, which held its meetings in the hall from its foundation in 1923 until 1939. By the late 1930s numbers were falling and the boys were moved to the country in 1938 prior to the outbreak of war. During the war Ingleton House housed a Civil Defence Social Club. It was then empty on and off until 1954 when the London County Council (LCC) opened it as an after care hostel for boys. The LCC was abolished in 1965 and the property was transferred to the London Borough of Lambeth. Ingleton House was demolished at the end of 1989 and the present house built for a housing association.

In the early 1970s the chapel was still part of Lambeth Social Services. Later on CAVE (Community and Voluntary Education) offered employment training and counseling services and it became an extension of CAVE School until it closed in 2006. The chapel remained unoccupied until Clapham Pottery took over.

Six years ago, in 2009 Clapham Pottery, which had been located at the Clapham Leisure Centre was re-housed together with two kilns in the former chapel in Rectory Grove with the help of Lambeth Council’s Regeneration Department. Students poured in and the project was up and running in no time; the venture was an instant success. Projects now include workshops for elderly carers, children for low-income families, Lambeth’s Ace of Clubs Homeless Project and Mencap, amongst others. Finally, in 2013, Naine Woodrow and her colleagues and supporters raised the necessary funds to buy the building from Lambeth Council. Naine, is a well-known local potter, who also runs the popular North Street Potters nearby. For further information about the pottery see www.claphampottery.co.uk

The Plaque was unveiled on Monday 5 October 2015 by Michel Roux Junior of Le Gavroche fame, who also runs the Roux Experience Courses at Cactus Kitchen Cookery School, which is based in Clapham; he was accompanied by his wife, Giselle. Councillor Donatus Anyanwu, the Mayor of Lambeth, was greeted by Annabel Allott, Chairman of the Clapham Society, along with Naine Woodrow and some fifty or so members of the Society, who turned out in the rain to celebrate the event. Glasses of fizz and nibbles were served in the adjacent church hall and it was a very jolly and happy occasion enjoyed by all.

Please wait for the gallery to load (7 pictures), it may take several seconds.