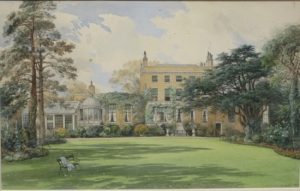 In the late 1700s Clapham was a fashionable place for country residences. City merchants built a series of mansions around the Common. Few of these remain, but 29 and 30 North Side, now part of Trinity Hospice, are probably the best-known examples.

Midway along South Side, on the Brighton Road, was Eagle House. This was described in a travelogue of 1801 thus: ‘About 60 yards from the road is a large handsome house, built with grey stock bricks except the part which connects the offices with the centre part, which is of stone’.

The house was built in 1773 by Mr Benjamin Bond, who had come into a fortune on his marriage to a wealthy heiress, Elizabeth Hopkins. Bond leased the site, about 15 acres from a local landowner, Sir Thomas Hankey, a governor of the Bank of England, whose direct descendant, the architect, Lord (Donald) Hankey, still lives in the area. Mr Bond was extremely proud of his new house and boasted to a dinner guest that it had ‘cost him all of £20,000’.

Accommodation was on lower ground, ground, first and second floors, with matching wings to north and south facing the common. There was a substantial garden to the rear, with ornamental lakes, one of which was spanned by a Chinese style wooden bridge and a carriage drive to the front. The exact date of construction was not known until recently, only that it was prior to 1780. From comparison of brick details, etc., with Holy Trinity Church (1776) and 52 Rectory Grove, a very similar house of 1778, it was assumed to date from about the same time. In any case all the occupiers from 1773 are known. These included William Smith, Member of Parliament for Sudbury, friend of William Wilberforce and grandfather of Florence Nightingale and William Edgar of Swan & Edgar, the former department store in Regent Street. The Edgars moved to South Side in 1844, William died in 1869 and his widow, Frances, continued to live at Eagle House until her death in 1889. Both are buried in the family tomb at West Norwood cemetery. All of Frances’ six children pre-deceased her. A grandson emigrated to Australia.

After 1889 the estate was sold, the big house, studios and buildings to the north pulled down and the present layout of streets developed. These followed the original boundary of the garden. Hambalt Road has a dog-leg at numbers 43/45 to follow the corner of the garden behind other houses on South Side. Development was rapid. The 1893 Ordnance Survey shows Narbonne Avenue built up from the common to Klea Avenue and three groups of houses in Hambalt Road. Some years later, in 1912, when a church was proposed, a vacant patch remained between the backs of Klea Avenue and Abbeville Road. This was on, or nearly so, the site of the lake, which might help explain the movement in the west front which was ‘tied in’ during the recent works to the Church of the Holy Spirit.

After demolition all that remained of Eagle House was the billiard room, the hay barn, the stables, and the screen wall of Bath and Portland stone. This was topped by an ornamental balustrade and later enclosed to form part of the building. The big Venetian style window in the back wall of the main house was saved from the demolition and set into the end gable wall of the billiard room. It is still there, facing 1 Narbonne Avenue. The billiard room became the Mission Rooms and were occupied by a religious sect until about 1975. This religious use was a source of some mystery, since although a few local residents, including the present owner, remember the ‘Notice of Services’ on the front wall, no one could identify the occupiers. Recent research has shown these to be the ‘Exclusive Brethren’ a secretive and reclusive branch of the Plymouth Brethren.

The stables fell into disrepair and were cleared away and replaced by two new houses in 1987. The barn also became a dwelling. These three dwellings are now behind a gate and styled Eagle House Mews. The Mission Rooms, now a grade II listed building, were sold separately and completely restored as offices for (and by) Sinclair Johnston & Partners in 1989. In 2008 the building underwent another transformation into a private residence again, for the home of Sinclair Johnston and his family.

The principle underlying this recent project has been to: –

Alterations for domestic use presented serious issues. Although originally part of a large house this remnant had never been a house in its own right, so there were no obvious bedrooms, bathrooms, kitchen, drainage or other domestic facilities.

The primary alteration was to rebuild the end wall of the large room (removed to extend the Mission Room) and hence in one stroke restore the original symmetry to what is now the sitting room, and create two bedrooms in the remote end. So this room now has matching niches, either side of the bay window on the east wall and matching door cases (one a dummy) either side of the recreated fireplace on the west wall. The original chimney flue and hearth were intact, but the chimney-breast had been removed. This fine room forms a double height sitting room with a gallery which serves as a library and gives access to the upper bedroom.

The room below, which may well have been the servants’ hall, has become the dining room. The entrance has an original half flight of stone stairs, which had been crudely widened with concrete. This was removed to reveal the original edge mouldings, and new iron banisters fixed in the traditional manner, with poured lead, into the original recesses in the stone treads.

The wealthy Edgar family kept a large staff and cultivated the fifteen acres of garden. While the garden and the back view of the house were recorded on contemporary photographs and were well known to local historians, there was no record of the front elevation facing the Common. In the summer of 1996 Mr. Wal Edgar of Melbourne, a direct descendant of the earlier occupier, visited Clapham in search of his ancestral home and eventually located the present remnant of Eagle House. On return to Australia he searched his loft and unearthed the photographs on which these notes and the illustrations in The Buildings of Clapham and Discovering Clapham are based. The Edgar family also have a fine watercolour of the garden and back of the house, signed and dated (1868) by a local artist, Edward Hull.

The history of the building and its occupiers and the research and development of the present scheme are intertwined. Amazingly, although the house has suffered grievously and changed ownership many times, it has been possible to establish contact with descendants of many of the early owners. Current representative of these families are given in brackets.

Please wait for the gallery to load (18 pictures), it may take several seconds.