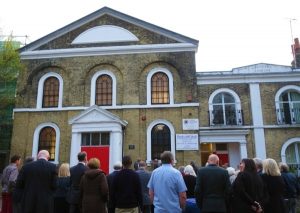 The building was constructed in 1852 (the date is shown in the pediment over the main door) for the Ebenezer Strict Baptists. The corner stone was laid on 6 August 1852 and the opening service held in January 1853. The chapel was known as Ebenezer Chapel, and the adjoining cottage, which was the manse, as Ebenezer Cottage. Within a few years the Baptists moved to a new chapel on the corner of Fitzwilliam Road, and this chapel was taken over by the Wesleyan Bible Christians.

In 1908 the chapel was purchased by the Trustees of the Pride of Clapham Lodge of the South London District of the Independent Order of Oddfellows Manchester Unity Friendly Society. Oddfellows evolved from the medieval Trade Guilds of the City of London in the late 17th and early 18th centuries. The Manchester Unity of Oddfellows, formed in 1810, is one of the oldest and longest established friendly societies. Friendly societies are non-profit organisations owned by their members.

This Society still owns the building and holds its regular meetings there. The records, which have recently been deposited at Lambeth Archives, give a detailed account of the workings of this long-established mutual society which provided support and payments to working men when they fell on hard times, in the days before the state provided any support. After World War II when the newly established welfare state took over many of these responsibilities, the expertise of friendly societies was used. The Oddfellows have also always had a social aspect, with regular meetings and social events.

Inside the building boards on the walls record the names of former presidents and other officials of the Lodge, as well as members who served in both World Wars. A World War II bomb which fell nearby, slightly damaged ones of these boards, and in tribute to brothers of the Order who did not survive the war, it has not been repaired.

The green plaque was unveiled on 16 April 2015 by Edmund Bird, Heritage Advisor to the Mayor of London and former Lambeth Conservation Officer. The Provincial Grand Master, John Mann PPMG and Brother Richard Bowles PPGM Trustee of the Loyal Pride of Clapham gave us a very warm welcome and arranged a delicious buffet, and showed us their treasures. Many members of the Oddfellows joined Clapham Society members in a celebration of the event.

Please wait for the gallery to load (12 pictures), it may take several seconds.