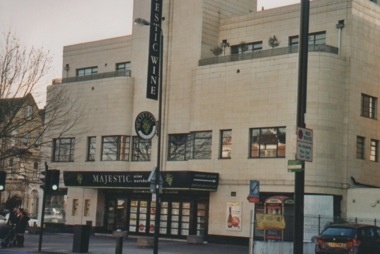 The cinema, which opened on 16 April 1938 with a film called Blondes for Danger, was commissioned by Oscar Deutsch from architect George Coles (1884-1963), one of the leading designers of Art Deco style cinemas in the 1920s and 1930s. Neon lights highlighted the main vertical and horizontal lines of the building, which were an important part of the ‘Odeon’ style, and made the cinema particularly distinctive at night.

A night time image can be seen on the
Historic England Archive website.

‘After passing through the entrance vestibule, one enters a large lofty foyer with balconies on three sides and a main central staircase leading up to the tea room and balcony foyer. The walls of this compartment have biscuit coloured background, with oversplatter of peach and silver. The balcony rester is banded in shades of green. Upper portions are banded in stronger shades of peach and silver. On ascending the main staircase one has a pleasing vista of the tea lounge through ornamental metal grilles. The balcony foyer gives access to two approaches to the circle and is decorated in similar tones to the entrance foyer. The auditorium is treated in a modern manner and the main ceiling is decorated in a pale biscuit colour speckled with peach and silver graduating into the walls, which have a ground colour of sea green speckled with leaf green and silver. The lower walls are panelled in two tones of Sapele mahagony with dividing bands of dark walnut. The acoustic material is embraced in the decorative treatment. Three large coves surround the proscenium, the cove nearest the proscenium is ornamented with abstract decoration. The seating and carpet are in a soft shade of leaf green.’

The cinema was badly damaged by enemy action in October 1940 which destroyed half of the front facade. The damage was sheeted over and it reopened almost immediately, the foyer and facade being rebuilt in 1948. The Rank Organisation closed the cinema on 9 September 1972 and wanted to demolish it and replace it with a block of 22 flats. Wandsworth Council refused permission and it reopened as The Liberty in 1974 showing Asian films. It finally closed in 1979 and the auditorium was demolished in May, 1985 with the foyer being converted to Majestic Wine Warehouse which is still in occupation. It opened in December 1985 with notices proclaiming ‘Opening Soon, Britain’s First Wine Cinema.’ The rest of the building was rebuilt as flats and renamed Foyer Apartments. The art deco facade was saved and with its faience tiles and characteristic fin still gives the impression of an Odeon cinema of the 1930s.

The plaque was unveiled on 4 December 2012 by Martin Humphries, (on left in the photo) Director of the Cinema Museum, shown with Annabel Allott and Derrick Johnson of the Clapham Society and Cinema Commissionaire, Morris Hardcastle (aka Robert Holden) after the unveiling.

Old photographs reproduced, by kind permission, from Cinemas and Theatres of Wandsworth and Battersea by Patrick Loobey, 2004.

Please wait for the gallery to load (9 pictures), it may take several seconds.