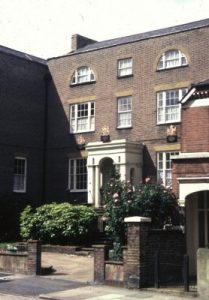 Sycamore House was built in 1787 on the site of a former house. The original village of Clapham was in the area around the present St Paul’s Church, Rectory Grove but in the 18th century began to spread, along the street now known as Old Town, towards Clapham Common.

Benjamin Bentley was the first occupant of the house, from 1787 to 1806. He was presumably responsible for the original interior which was in the classical style of the Adam brothers, whose hugely influential book, Works in Architecture, had been published in 1773.

From 1807 to 1819 Roger Lee and his family lived in the house. Lee appears to have been a man of many parts as he is variously described as a shipowner and ship builder, a Lloyd’s underwriter and Overseer of the Surrey Highways. His wife, Ann Harding, according to family notes had ‘a large dowry and a long pedigree’. Lee was a stalwart supporter of the Congregational Church, which was at the corner of Old Town and Grafton Square, and in 1826 became treasurer of the church. By that time he had moved to Springwell House (now Parkgate House School) on Clapham Common North Side, a house which had been specially built for him.

The next resident was Daniel Turton Johnson, about whom nothing is known. He remained until 1841, when like so many large houses in Clapham, Sycamore House became a private school, first for young ladies and then, in I865, for boys. In 1868 it was a Working Men’s Club but by 1880 it was the Surrey Reformatory for Girls. Finally, in 1898 it became a laundry.

In I865 a Mrs. Buckland began business as a laundress in Clapham. She is said to have collected laundry in a barrow to wash and iron at home. This was one of many cottage laundries which started around that time in response to the demand engendered by the fashion for stiff collars. By 1888 the business was at The Sycamores, Rectory Grove.

In l880 Alexander Dennis Leman, a wholesale tobacconist, married Mrs Buckland’s daughter, Adelaide, and it was agreed that he should take over the laundry, which by then was a thriving business. In about 1898 he moved it to No. 4 Old Town, which was empty at the time. The washing used to be collected by horse-drawn van, and early photographs show the staff hanging laundry in the back garden. Within a few years the back garden was built over in order to house new boilers and laundry equipment.

Dennis Leman died in 1926 when his two sons, Alexander and George, took over the business. They died in 1952 and 1953 respectively. The Sycamore Laundry remained a family business, under the direction of the sons and grandsons of George Leman until a merger in 1994 with a larger laundry, Blossom and Browne. The works in Clapham then closed, though a small shop still remains at No. 8 Old Town for taking in laundry which is sent on to the main laundry site. Over the years the Sycamore Laundry had built up an enviable reputation for high class work and laundering historic and delicate items, which have included Queen Victoria’s christening gown. It was also awarded four Royal Warrants – Her Majesty Queen Elizabeth II, The Duke of Edinburgh, the late Queen Mother and the Prince of Wales. In 1980 the Duchess of Gloucester paid a visit to the laundry.

In 1994 the laundry buildings on the site of the original garden were demolished and the gated estate, Sycamore Mews, built while the main house was converted back for residential use. The main floor was bought by bespoke furniture designer Tim Gosling ,who has restored many original features of the 18th century house and converted the original laundry room, to be his studio. See his website www.tgosling.com.

The Clapham Society green plaque was unveiled in August 2011 by the late Dame Vivienne Westwood, who lived close to Sycamore House until her death in December 2022.

Please wait for the gallery to load (17 pictures), it may take several seconds.