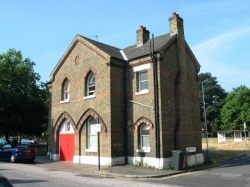 The building now called The Lodge, at 33 The Pavement SW4, was built in 1868 as a Fire Station. It was on land previously owned by the Parish of Clapham, where there had been some sort of parish building since at least the seventeenth century. That building was originally a lock-up for thieves, drunks and vagrants, and later a house for the parish fire engine. The parish brigade however was not a great asset: Clapham historian Eric Smith wrote:

“If there was a fire you could find on the notice boards the address of the man who had the key, and while he was being fetched, helpful neighbours would no doubt summon members of the brigade. When the fire was reached, the hose had to be coupled, if possible, to some available hydrant, but the local brigade had not a good reputation for efficiency. There was one horrifying occasion in 1861 when a shop on the Pavement was burning fiercely when they arrived, and in their great haste to connect the hose, the metal coupling jammed – and someone used a sledge-hammer. After that there was nothing for it but to send a messenger post haste to summon the London Fire Brigade. They galloped manfully some four miles to the scene of the fire, but by then three shops were in ruins.” (Eric E F Smith, Clapham pubd 1976)

That Fire Brigade was a private enterprise formed by ten insurance companies. Its Chief Fire Officer, James Braidwood, was killed in the great Tooley Street fire in 1861, and a year later, the insurance companies told the government they were unwilling to continue. In response, in 1866 a Metropolitan Fire Brigade was formed, publicly funded under the control of the local authority then responsible for London as a whole, the Metropolitan Board of Works (MBW). The new brigade retained the leadership of Braidwood’s successor, Captain Eyre Massey Shaw, probably the only fireman to be commemorated by name in a Gilbert and Sullivan operetta (Iolanthe).

The Clapham Vestry was only too pleased to hand over their fire engine house to the new brigade, and it was leased to the MBW for 45 years from 25 March 1867, for an annual rent of £1. The intention was that the MBW would make improvements, so that it could accommodate two men, and their Architect Edward Cresy junior got to the point of seeking tenders. However, in November 1868, the Vestry had second thoughts. They “were of the opinion that the proposed alterations and additions to the existing building would not prove satisfactory. That as the building stands on the high road on Clapham Common it was desirable that the present building should be taken down and an entirely new building, of suitable though not costly elevation, erected in its place, more in keeping with the character of the neighbourhood and the operations of an important public body.”

Admirable sentiments, especially if someone else was going to pay for the new building. The MBW Fire Brigade Committee was prepared to, and ordered Cresy to draw up plans for a new station, within a cost of £650. Tenders were received in May 1868. 16 firms tendered: the lowest was a local builder, J Blackmore, at £615; most of the rest were in the region of £750 – 850, with the highest way out at £1,100. Blackmore’s was accepted, and 9 October 1868 Captain Shaw was able to report that duty had commenced.

The 1868 fire station was one of 26 built around London at that period, to meet the needs of the new Brigade. They were all designed by Edward Cresy, who is little known, since he died prematurely in 1870.

The new fire station served the Clapham locality for 34 years. But over the years, appliances increased both in size and in number, and most of Cresy’s fire stations had to be drastically enlarged or rebuilt. Apart from Clapham, only two others survive substantially intact, and Clapham is the only suburban example to survive. This is essentially because it stands on a restricted site – the surrounding green is part of the Common. Thus, when it had to be replaced in 1902, its successor was opened on a larger site in Old Town.

In the next decade, it is not clear what use the old Fire Station was put to. But when the lease expired in March 1912, the LCC surrendered it to Wandsworth Borough Council (which now owned the freehold). Then in May 1912, as part of a deal enabling a new footpath to be formed on Streatham Common, the building was transferred to back the LCC, for use as a residence for the officer in charge of the Common and other service purposes. Renamed The Lodge, it remained the Common Keeper’s residence for most of the twentieth century. At some stage, one of the two doors for the fire engines (seen in old pictures) was blocked up, but otherwise the building remained unchanged. By the end of the century, it had become redundant, and in 2004 Lambeth Council, now its owners, sold it. To preserve its future, the Clapham Society, greatly assisted by Professor Andrew Saint and Diana Burfield, Edward Cresy’s biographer, successfully applied for it to be Grade II listed.

The Society’s green plaque was unveiled by Professor Saint on 5 June 2013. We are very grateful to the owners for their permission to erect the plaque on their building.

Please wait for the gallery to load (6 pictures), it may take several seconds.