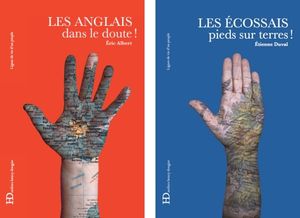 London-based French journalists, Eric Albert and Etienne Duval,  give a talk entitled:
Au revoir to the Union? A European view of post-Brexit London, England and Scotland.

Eric Albert and Etienne Duval have both reported extensively on Britain. Eric, who lives in Clapham, is City correspondent for Le Monde.
Etienne, who is half-Scottish, is a former London correspondent for French, Belgian and Swiss TV.

In 2014, the two were each asked by a French publisher to write a contemporary profile of Britain from their own perspective. Eric wrote Les Anglais, Etienne Les Écossais.

These two books, pictured above, will be for sale at the meeting

Monday 23 January. Our meetings are held at Omnibus.

Meetings are free and open to non-members, so please come along and bring a friend!