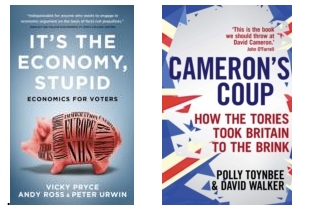 Local resident and well known economist, Vicky Pryce will speak about her book It’s the Economy, Stupid, Economics for Voters.

Vicky argues that it is important to dig behind the claims made by politicians of any party and cut through the potential untruths, half truths or mis-representations by politicians. The book explodes some of the most entrenched myths of British political debate.

Polly Toynbee, former Clapham resident and Guardian columnist will introduce Cameron’s Coup: How the Tories took Britain to the Brink.

Polly dissects the record of the Cameron coalition, arguing he used the pretext of financial crisis to pursue a
nakedly ideological agenda in health, schooling, and welfare, going further than Margaret Thatcher dared.

This event will be held on Wednesday 22 April at 7 pm
at Omnibus, 1 Clapham Common North Side, SW4 0QW.