Clapham Through Time by Alyson Wilson and Claire Fry 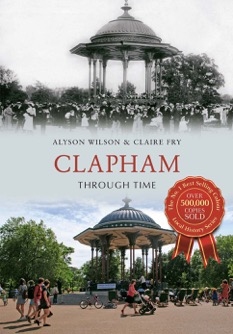 This fascinating book traces some of the many ways in which Clapham has changed and developed over the last century.
Clapham Through Time is a selection of photographs of Clapham in the past shown alongside exactly the same views taken this year, with a brief historical commentary for each pair. The book records the huge changes in the area in the last fifty years, let alone the last century.

Clapham Through Time (Amberley Publishing, price £14.99) was published in mid-November and was available at our meeting on 16 November.

Update:
The launch in November was enjoyed by many, and the book has become popular among the residents of Clapham, and among ex-residents enjoying a reminder of happy times living in Clapham. Many have ordered two copies, declaring it an excellent gift!

The book has been published and Clapham Through Time can be purchased directly from us and is listed on the Clapham Society’s publications page.

It is in stock at Clapham Books, 26 The Pavement, Clapham, and they are happy to order for you as stocks run out.
The book is also available at Amazon.co.uk. 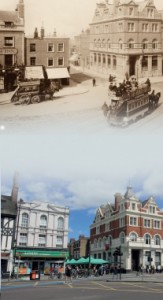 In ancient times Clapham was a secluded Surrey village, clustered round a manor house and church. By the seventeenth century, the wealthy of London were building houses here as rural retreats and, by 1800, their mansions in extensive grounds surrounded Clapham Common, which was becoming a place of recreation. The development of the railways in the nineteenth century meant that families who could afford large houses moved further out to the countryside, selling off their ground to developers who built the terraced houses which cover the area today. Around forty years ago, after a period of neglect and bomb damage from the Second World War, the area started to become ‘gentrified’ and is now a desirable London suburb.

CLAPHAM THROUGH TIME traces these changes over the years. A few mansions have survived and been put to new uses, several churches lost during the war have been replaced, Clapham Common is recognisable though used quite differently, but the greatest change is in the appearance of the ordinary streets – the shop fronts, vehicles and people. Many who have arrived in Clapham during the last few years will be amazed by its former appearance!

Alyson Wilson has lived in Clapham for nearly 50 years and has always taken a keen interest in local history. Alongside her career as an art historian and researcher, she has written and edited several books about Clapham.
She is a member of the Clapham Society’s Local History Sub-committee, and gratefully acknowledges the opportunity to draw on the extensive research and images provided by other members of the group and past historians of the area.

Claire Fry is a graphic designer who has lived in Clapham for over 30 years. She has a special love of the Common, where she walks her dog. She has a strong interest in the changes that have taken place in Clapham over the years, and records these regularly with her camera.