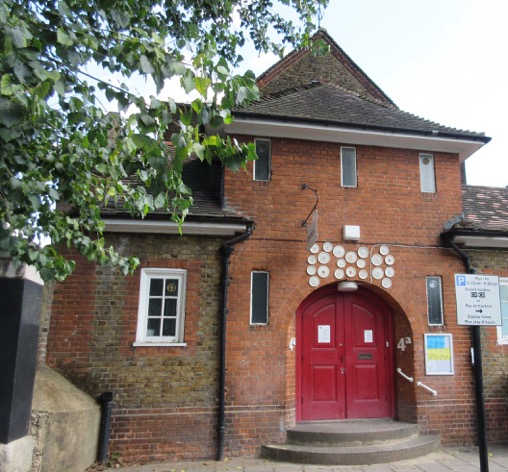 Join us as we unveil the Clapham Society’s eighth Green Plaque on a notable local building which has changed its use.

This plaque will be on Clapham Pottery in Rectory Grove, which was formerly the chapel of Ingleton House Boys’ Home.

The plaque will be unveiled on

We started our big adventure at the beautiful old chapel in Rectory Grove six years ago in September 2009 with the help of Lambeth Council’s Regeneration Department. We had previously been at the Leisure Centre so were delighted to be re-housed and had been able to save enough money to buy two kilns.

It was an instant success. Students poured in, so we were up and running very quickly. We had purpose-built the inside to make it usable as a pottery and managed to do this without disturbing the old Edwardian panelling. Then when we realised we had some money left over each term, we started to invite adults and children who couldn’t afford to pay fees, even our very reasonable ones. This too really took off so we started applying to other charities and foundations to expand this work. We seemed to have got this right as several foundations over the past five years have been making small grants to us.

Currently, we have workshops for elderly carers, children from low-income families, Ace of Clubs Homeless Project, Lambeth Mencap, amongst others. Then in 2013, with all this going on, we were forced to actually buy the building rather than rent it from Lambeth, otherwise they would sell it off. This threw us into a spin but we latched on and managed to raise the required £175,000, one way or another in a year! So now we embark on our seventh year with fully subscribed classes of students phoning daily to ask when term starts and a building that can remain in community use in perpetuity.